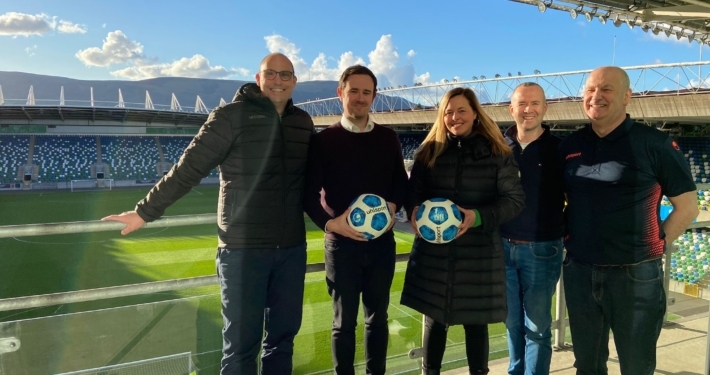 The NI Football League (NIFL) and uhlsport GmbH are delighted to announce an extension of the existing partnership as official match ball suppliers for a further three seasons.

uhlsport have been the official ball supplier of the NI Football League (NIFL) since May 2016 and have become a synonymous brand as part of the fabric of football in Northern Ireland during the past six years, as the league has enjoyed huge growth on and off the field.

“We’re delighted that the journey with one of our longest and most valued partners will continue for another three seasons. Fundamentally, the most important part of our league is the ball that allows everyone to enjoy the game we love. We have a fantastic product and the uhlsport match ball has become one of the most recognisable features of our game.” Said Gerard Lawlor, Chief Executive of the NI Football League.

“We are extremely pleased about the further extension of our contract with the NI Football League. The UK and Ireland is undoubtedly one of the most important football markets in Europe and our uhlsport footballs enjoy a great reputation through our long association with NIFL.” said Dirk Lehner, CEO uhlsport GmbH.

“The journey we have been on together since 2016 with the NIFL is entering an exciting new stage and this fills us with pride, as it is far more than a sponsorship for us! We are delighted that NIFL is technically relying on our ball expertise, and we also see ourselves as an active partner promoting the league far beyond Northern Ireland.”, said Melanie Steinhilber Director Markets uhlsport GmbH.

The partnership will continue to see all leagues and competitions within the NI Football League structure use the uhlsport match ball including the Danske Bank Premiership and Women’s Premiership as well as the BetMcLean Cup, Lough 41 Championship, Premier Intermediate League, Development Leagues and Academy Leagues through until season 2025/2026.